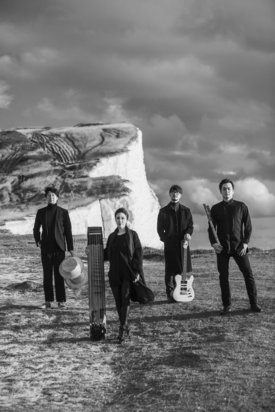 Cover art by Peter Krauskopf (2019), by kind permission of the artist

The band Black String has added several new dimensions to the genre "world music". The South Korean quartet led by geomungo (traditional Korean zither) player Yoon Jeong Heo takes stylistic building blocks from traditional Asian music, jazz, blues and rock, and from electronica too, and juggles them expertly. It’s a powerful mix, bursting with all kinds of timbre possibilities, a context in which improvisation and traditional forms truly merge. The new album "Karma" represents a modern, global kind of music. Whereas it knows no borders, it definitely has strong and deep roots.

Black String's debut album "Mask Dance" had a great reception from both audiences and critics. The New York Music Daily wrote of "towering, hypnotic, psychedelic Korean post-rock majesty", and Jazzwise magazine in the UK described the album as "an engaging exploration of what can be achieved by bringing ancient and modern into creative fusion." The German magazine Jazzthetik spoke of "something of a defining moment for world music". In their home country Black String received the Korean Music Award for "Best Jazz and Crossover Performance," and Songlines, the leading world music magazine, gave "Mask Dance" its “Asia and South Pacific Award” for the best release of 2018. It was logical for Black String to embark on a world tour, so they have spent the past two years performing at prestigious halls and top festivals. The interplay of the four band members – Yoon Jeong Heo on the geomungo, an instrument that can be played in so many ways, Jean Oh on the guitar, Aram Lee on the daegeum and yanggeum flutes, and with Janggu percussionist and singer Min Wang Hwang – has now deepened much further through this, something which can be heard demonstrably and convincingly on their second album.

People who enjoyed "Mask Dance" will love "Karma" too. The way in which the typical melody lines of classical Asian music and the sound of traditional instruments are fused with current styles and methods is even more artistic and multi-layered, and the result is music which is completely new and individual. The opening track "Sureña" draws the listener in completely: the groove is blues-based and it underlays the ethereal theme, which in turn is taken over by the different instruments in improvised solos as in jazz. There is also sparse use of electronic sounds. Even more astonishing is the effect when Min Wang Hwang dramatically intones the traditional Korean shamanic singing on "Exhale-Puri", and then rises to a shout – accompanied by the band playing swelling rock rhythms. "Blue Shade", the final piece of the album sounds like it might be some kind of Far Eastern ProgRock. In any event, the rhythmic and dynamic force is irresistible, as Black String’s unique mixture of the old and the new rolls towards the listener. Nguyen Lê, the doyen of musical cultural transfer – in his case between Vietnamese folk music with jazz and rock – appears as a guest on two tracks. But there are other moods to "Karma" as well: this band can enter a mysterious and meditative zone, as it does in the title track.

Karma is an Asian spiritual concept whereby every action inevitably has both physical and spiritual consequences. It is the perfect title for this album, since no listener could possibly be indifferent faced with what Black String do. Their music, which combines the complex and the extremely catchy, triggers mental as well as physical reactions. This is a world in which epochs and styles intertwine. From every point of view this album is a completely captivating listen.