Cæcilie Norby
just the two of us 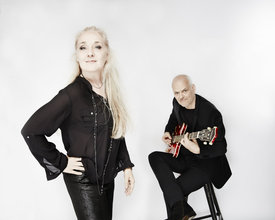 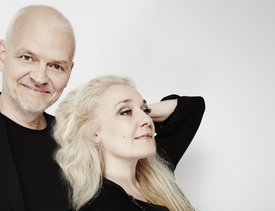 The sound of a bass starts things off - tender, dreamy and resonant. Only a player like Lars Danielsson can introduce a melody quite as magically as this. Then Cæcilie Norby joins in and sings Joni Mitchell’s eternal ballad “Both Sides Now” in her own irresistably sensuous way, entrenched in blues and utterly charming. With the very first note Norby and Danielsson take their listener on a journey
into their private music universe, which leaves no-one unmoved.

For many years Norby and Danielsson are a married couple but musically they went their separate paths for a long time: Norby was the pre-eminent funk and jazz singer in Denmark, until she took herself off to America, long before other Scandinavian singers followed her example. She became the first European female artist to be signed to the Blue Note label, a move which led to working with global stars such as Mike Stern and Chick Corea. Lars Danielsson, from Sweden, also has a major international career to his name, working alongside the likes of Charles Lloyd and the Brecker Brothers; but over and above that, he has developed as an artist (and also as a producer) through being a long-standing member of the ACT label family, and is now regarded as one of the most significant European jazz musicians. Just recently Danielsson has received the prestigious ECHO Jazz 2015 as best bassist international in Germany.

Norby has also found her artistic home at ACT, where she has now been since 2011. Her husband was closely involved in the production of both of her albums for the label. In return, she brings her musical know-how into Danielsson’s productions, just like on the most recent album “Liberetto II”, released in 2014.

The two have now taken on another venture together, performing an intimate duet, “Just The Two Of Us.” Danielsson explains: “This was a major challenge. For a bassist, the voice is the most demanding of instruments with which to work in a duo. You have to proceed with extreme delicacy when it comes to intonation and pulse. It can only work with two people who know each other really well, and who have a sixth sense for the direction the music is taking. Cæcilie knows how to react instantly to my playing, I couldn't have done this with anyone else.”

Apart from songs by Joni Mitchell, Leonard Cohen and the great Abbey Lincoln, these two play their own compositions. These range from songs that come from deep-set emotions, like “Sad Sunday,” to an arrangement for duo of Danielsson's popular composition “Liberetto,” to which Danielsson has added a trademark extra section, “Cantabile.” The variety of expression that they achieve together, the sheer opulence of their musicality will amaze the listener.

The album runs the gamut from the more classical “Toccata” to the grooving feel-good song “And It’s Supposed To Be Love.” Norby and Danielsson take on the folksy nonchalance of the charming ballad “Cherry Tree”, and also get stuck into the melodramatic soul number “Wild Juju Child.” They range from the near-silence of the miniature “Wondrous Story” to the African highlife
spectacular “Wholly Earth.”

Danielsson bows and plucks the bass, but that is far from all he does: he plays cello, and reveals himself to be
a fine guitarist, and also deploys percussion instruments including marimba. Norby's vocal contribution goes all the way from the tenderest pianissimo to a gutsy shout, and she also accompanies herself on percussion – utilising both the Nigerian udu and the sansula (thumb-piano).

Norby and Danielsson are virtuosos, they are experienced artists, they are soul-mates who trust each other. Expect some magic.