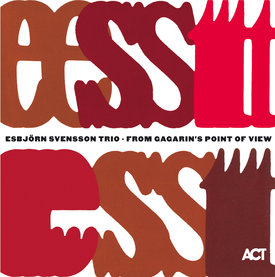 Esbjörn Svensson reaches into the piano, and plucks the strings, searching for the sound of a guitar. He cautiously experiments with percussive accents, and dives into the depths of the orchestral-inspired forms. Attentive to the necessary considerations of musical balance, he integrates electronic elements into his musical vision, creating an optimal mixture of textures. He supplements his ideas with new harmonic ideas, surprising melodic variations, and catchy motifs. Because his music is the kind of art that doesn’t rely on the safety of a particular style, it is all the more effective.

Openness, curiosity, and a little bit of chance are all a part of Esbjörn Svensson’s artistic foundation; "I play piano because we didn’t have any other instrument in the house. Actually, I would have rather played drums. For instance, as a kid, I put together a drum set out of old odds and ends, and tried to play like some of the popular drummers I had heard. But then Magnus Öström came with his drums, and I decided to stay with the piano. Magnus and I grew up together, and have played together from the beginning. When Magnus was given his first drum set, he brought them over to my house, and we started playing. We had no idea how to play, but it was a lot of fun. Since we didn’t have a teacher, and no one was telling us how to play -you know, ‘you must do it this way or that way’, we were able to gradually develop our music in a very unique, individualistic way."

Esbjörn Svensson was born in 1964 in Västeras, Sweden. His mother played classical piano, his father loved Ellington, and Svensson listened to the latest pop hits an the radio. In high school, Esbjörn played in his first bands, along with taking piano lessons For three years. There followed four years of musical studies at the University in Stockholm where Svensson developed the necessary technical craft to fully articulate his intuitive self-taught concepts. Thus, Svensson’s carefree, youthful musical exuberance could mature into a creative self-awareness. Along with such Swedish players as Jan Johansson, Svensson counts Chick Corea and Keith Jarrett as major influences. Svensson is able to take their respective distinctive stylistic characteristics and meld them into his own musical vision.

From the middle eighties on, Svensson established himself as an inspiring sideman in the Swedish and Danish jazz scenes. He formed his own trio in 1990, but it wasn’t until 1993 that he got necessary lift to get a CD off the ground. It was in 1993 that he met Dan Berglund an a gig they were both working. Svensson was fascinated by the structural strength and creative diversity of his playing and was able to entice Berglund into joining the trio. In the same year, the Esbjörn Svensson Trio recorded their debut album, When Everyone Has Gone (Dragon): in 1995, the live recording Mr. & Mrs. Handkerchief (Prophone), in 1997, EST Plays Monk (BMG), and in 1998, Winter in Venice (BMG) were released. The talented newcomer began to collect prizes. In 1995 and 1996, he was voted Swedish Jazz Musician of the Year, and in 1998 he was awarded the prize as best songwriter. Playing with such musicians as Alex Riel, Mads Vinding, Viktoria Tolstoy (White Russian, Blue Note 1997), and above all, Nils Landgren, Svensson has become known throughout Europe; he played a decisive role in making the Nils Landgren Funk Unit concert at the 1998 Montreux Jazz Festival the highpoint of the festival.

The Esbjörn Svensson Trio moves a step further with the May through November 1998 recording of the album From Gagarin’s Point of View. Complex motifs and thoughtful stylistic variations are combined with subtle rhythms For the necessary mixture of groove and memorable melodies. The eleven compositions integrate gravity with humour, individuality with mass appeal, concept and vision with a brazen casualness into an up-to-date improvised potpourri; "We try to let the music flow. That’s also why the rather strange album tide that Magnus came up with works. Gagarin was the First man to gaze back at the earth from space. Out there in the solitude, he could survey all that passed by below. We liked this image, and felt it worked for the tide and the concept of the album".