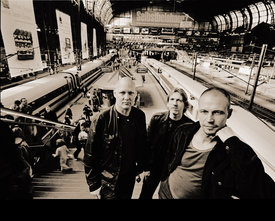 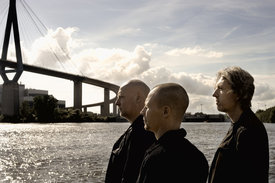 “I have been listening to jazz concerts for more than 50 years, and I consider myself lucky to have witnessed almost all the great piano legends: Count Basie, Dave Brubeck, Duke Ellington, Bill Evans, Erroll Garner, Earl Hines, John Lewis, Thelonious Monk, Oscar Peterson, Bud Powell, George Shearing and Horace Silver. Sadly, I have missed Art Tatum and Fats Waller, but have made up for it by listening to all the contemporary greats like Joe Zawinul, Herbie Hancock, Keith Jarrett and Brad Mehldau.
Yet the single pianist I have heard live most often is Esbjörn Svensson. I first witnessed him live with Nils Landgren in 1996, and since 1997 – when e.s.t. became part of the ACT family – I have heard him perform time after time with e.s.t. It must have been at more than easily 50 concerts. It is always fascinating to observe e.s.t. giving each performance a different twist and how they take every new audience through a range of emotion that runs from trance through to ecstasy.
The evening of November the 22nd 2006 in the Musikhalle Hamburg was special even by e.s.t. standards. As the final concert of the Tuesday Wonderland tour came to a close, I felt that I had experienced the absolute best e.s.t. concert ever. The band had played their hearts out once again, and the Hamburg audience loved them to bits.
The NDR had recorded the concert and I could not wait to listen to the music once more with a little more distance. When I received the recording from Burkhard Hopper, the manager of e.s.t., it was clear that I had not deceived myself: e.s.t. had made history that evening.”

e.s.t.´s concerts are legendary and have won the band fans worldwide also outside the jazz field. Their approach to present their music together with a distinctive light show that reminds of rock and pop shows and their across-the-board use of stylistic elements and subtle use of electronics is unique in its way, has created an own genre and has paved the way for a whole lot of followers. On a worldwide scale e.s.t. are acknowledged as Europe´s leader in jazz, documented recently by a cover story in the US jazz magazine “Downbeat” – the first for a European band since the magazine was founded some 75 years ago.

e.s.t. are known for their strive for perfection, their innovative power, but also their rigid quality control when it comes to their albums. So again you can expect the best in sound quality, musicality and performance.

This sold out concert in Hamburg on November 22, 2006 took place towards the end of the German leg of the Tuesday Wonderland world tour. Altogether the band performed more than 100 shows in 24 countries to an audience of well above 200,000 people during that tour. The recording reflects the concert one to one, no songs were taken away and the order of the songs as they were performed on that night is intact as well. Impatiently awaited, e.s.t. live in Hamburg is the first live-album of the band in twelve years, and it is certain not to disappoint the fans. Besides containing live versions of seven songs from Tuesday Wonderland, it features three further highlights from the e.s.t. repertoire.

Be invited to take your seat in the beautiful Laeiszhalle in Hamburg and listen to a night full of music by e.s.t.!