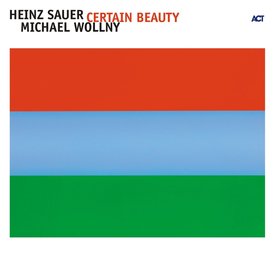 Recorded and Mastered by Jan Erik Kongshaug at Rainbow Studios, Oslo, Norway on October 3 - 4, 2005 and by Adrian von Ripka at Bauer Studios, Ludwigsburg, Germany, on November 11 and December 16, 2005
Produced by Siegfried Loch

A pair of radicals and the art of synthesis without sacrifice
On "Certain Beauty", their second album for ACT, saxophonist Heinz Sauer and pianist Michael Wollny show how perseverance can lead to music of exquisite splendour

Rarely has a German jazz release caused such a tidal wave of awards and rave reviews.  The WELT AM SONNTAG places this music right with "the best that German jazz has to offer", and DIE ZEIT went even further when it claimed, "Jazz has come alive again". The renowned German jazz record reviewers award, five stars from FONOFORUM, four stars from the French JAZZMAN, these are but a few of the reactions to "Melancholia", the 2005 debut CD of saxophonist Heinz Sauer and pianist Michael Wollny (ACT 9433-2). Additionally, Michael Wollny was presented with the Bavarian Art Prize and the highly regarded annual awards by the Munich newspapers ABENDZEITUNG ("Star of the Year") and TZ ("annual bunch of roses"). What does one do in an event like this? You go with what you were doing, and do it with even more conviction.

Forty-eight years separate these two "headstrong" (DIE ZEIT) musicians, but musically they could not be closer. Saxophonist Heinz Sauer, a great and highly influential figure in post-war west German jazz, and Michael Wollny, the big discovery in German jazz in 2005 were born in 1932 and 1978 respectively. One of them grew up in a time when jazz was the expression of the awakening after the Second World War and a disastrous dictatorship, the other one in an age, in which anything goes, and musical symbols have become ambiguous and iridescent. One of them relatively bald, the other with a mop of hair, but both blessed with a unique musical mind and great intensity. Sauer’s tone has been compared with flowing, molten lava, a tone that erupts with archaic force and glistens in a multitude of nuances. Wollny sometimes explodes behind the piano, sending sound-splinters that come from a truly free universe flying in all directions. His is a language that is unburdened by deliberations about tonality or atonality. And when the duo starts to play, we can feel the mental and emotional connection immediately.

The duo’s expressiveness is at its most accessible, when they play well-known tunes, as in their much-lauded version of Monk’s classic "Round Midnight" on their debut album. The repertoire on their current release reveals the artists’ very different roots – it comprises "standards" that originate in very different times. The vast and colourful spectrum reaches from Gershwin’s "I Loves You Porgy" and Monk classics like "Evidence" and "Ruby My Dear" to "Nothing Compares 2 You" by Prince and Björk’s "Where Is The Line (With You)". Not to forget  "Chelsea Bridge" and "Lush Life" two of the great ballads by Ellington alter-ego Billy Strayhorn. And of course the title track "Certain Beauty" a composition by the late Albert Mangelsdorff, a take which becomes a homage to a long time companion of Sauer’s and one of the most influential German jazz musicians of any period.

Track 11 and 12 of the CD demonstrate eloquently how classics of then and now can complement each other and work together to create a unified language. Track 11 is the Bille Holliday showpiece "Lover Man" and 12 is a touching, lyrical piece by pianist Esbjörn Svensson, "Believe Beleft Below". 60 years lie between the composition of both tunes, yet here they become parts of a whole. The emotional palette of Sauer’s tone on "Believe Beleft Below" cannot be bettered: Sounds that reach from howls of despair to desperate, cynical laughter, quietly embedded by Wollny within his own masterfully woven aura.

A duo’s potential lies in the musician’s ability to nurture each other’s individuality. Here we have two individualists, whose refined awareness of each other enhances their personalities. Sauer has always been one of the most intense musicians of jazz saxophone history, but in the duo with Wollny this aspect of his playing becomes uniquely tangible. And Wollny - whose enormous creative potential can also be witnessed on the CD "Call it" with his trio [em] (ACT 9650-2) – seems to develop an even greater immediacy in accessing his overwhelming talent in his collaboration with Sauer. It would be beside the point to claim that Wollny is Sauer’s fountain of youth, and Sauer is Wollny’s catalyst: Neither of them needs this. Their relationship is more like an animated conversation, a conversation that sends sparks of inspiration flying in all directions.

The title "Certain Beauty" says it all. The beauty that Sauer and Wollny unfold in their music is at times adventurous, rough, always pulsating with strength, uninhibited, yet infinitely tender, full of light and shadow, a magical prism of colour, rich in subtlety, and at once persistently and radically personal. It is the beauty of jazz.