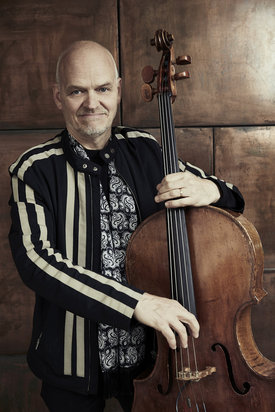 Cover art by Philip Taaffe, by kind permission of the artist

Good things are worth waiting for. Lars Danielsson had recorded just a few tracks for a new Liberetto album in late 2019. So, when a window appeared in September 2020 between the lockdowns across Europe, he seized the opportunity to bring his fellow band-members back to his studio near Gothenburg to finish what they had started.

Those who know how attractive and approachable Liberetto’s music is will find all their expectations fulfilled on “Cloudland”. The 'elegant lyricism' and 'unerring groove' which Canadian writer John Kelman (All About Jazz) spotted in 2011 in the band’s first album are to be found in abundance on this, their fourth. "I think of my compositions as songs,” says Danielsson, who never forgets the importance of melody. After all, as he still vividly remembers, his very first music teacher was an organist responsible for steering the congregation through the hymns in a church. “Cloudland” also shows the variety of Danielsson’s range of timbres and expressive possibilities. We find them in both foreseeable and new ways. Right from the start of “Imagine Joao'', a duet with John Parricelli, he states the melody with the elegance and eloquence of the consummately lyrical bassist we have come to expect. Whereas, for the last sixty seconds of Villstad, most listeners will probably jump to the obvious but wrong conclusion that the heroic, Hendrix-like sound they are hearing is an electric guitar. There is definitely alchemy, sorcery going on here and appearances can be deceptive: this is Danielsson playing cello and using a distorted amp.

There are new elements in “Cloudland”: Danielsson’s desire to work in asymmetric meters has been an area of exploration for many years, the bassist/cellist having been a member of Trilok Gurtu’s band in the 1990s, and he has taken it further here, while never sacrificing the appeal and the emotional impact of the music. Danielsson’s philosophy, essentially, is this: “If it sounds natural then it doesn’t really matter what meter it's in.” And that is particularly true of the title track, which is in seventeen time, but has a completely irresistible pulse, flow, even an airy elegance about it, enhanced by the unique presence of trumpeter Arve Henriksen as the lead voice.

Another new feature is the first outing for a five-string bass-cello hybrid which Lars Danielsson plays ‘arco’ on the opening track “Vildmark” (meaning wilderness) and plucked in “Tango Magnifique”. “It’s a rebuilt 18th-century instrument,” says Danielsson, “and it doesn’t just look beautiful, it has a wonderful sound – it really sings!” This album also marks the Liberetto debut of lively Syrian-born clarinettist/composer Kinan Azmeh. He is a multi-talented musician whose activity ranges from Yo Yo Ma’s Silk Road Ensemble to commissions as composer from the NY Philharmonic. In the quietly reflective “Intermezzo” we hear both his warm and beautifully focussed tone on the clarinet, and a poet's sense of phrasing.

This album is also a celebration of the myriad talents which the members of Liberetto bring to Danielsson’s music. These musicians have been familiar with his music for most of a decade. They understand it, they cherish it, and throughout “Cloudland”, the joy they are evidently experiencing in being back together playing it is palpable. On “River of Little”, pianist Gregory Privat’s playing of the theme has luminous precision, yet the glimpse he gives us into an improvised world of freedom and fantasy is magical. We hear guitarist John Parricelli’s range: from the nylon-string delicacy of “Tango Magnifique” to the casbah-ish electric riffs of “Desert of Catanga. Arve Henriksen's playing on the title track “Cloudland” will stay in listeners’ minds for a long time. And drummer Magnus Öström’s sensitive command of timbre and texture is jaw-dropping in the hushed “Nikita’s Dream”.

“Cloudland” richly rewards listeners' patience; one of its very special features is the variety of its beautifully crafted endings. Take for example, the perfect poise of the 'rallentando' which brings the title track to a close; or the enigmatic and questioning final bars of “Sacred Mind”; or the flawlessly precise and crisp conclusion to “Desert of Catanga. These are just three examples of careful, thoughtful work by the co-producers who have clearly been working throughout the time the album has been in the making as a harmonious creative team: Cæcilie Norby, Magnus Öström and Danielsson himself. In every sense, this album provides a reminder that worthwhile creative processes take time to mature.