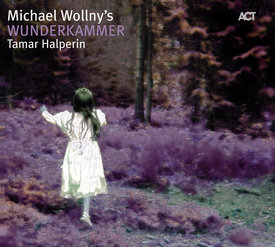 All music composed by Michael Wollny

Michael Wollny is a musical adventurer, someone who always seeks out new sounds and sends his audience on exciting journeys of sonic discovery. Consequently, the critical response to his music has been appropriately enthusiastic. In 2009 he won both the jury and the audience prizes of the prestigious inaugural BMW Jazz Award in Munich, with his trio [em]. The industry’s critics have also been raving about his music for years, whether solo or performing with other musicians. The French publication Jazz Magazine described Wollny as, “the spearhead of a new generation of European jazz musicians”; Fono Forum described his “magical sounds”, and Jazzthing magazine wrote: “Piano music which has probably never been heard before in this form.” It is as if the critics all already knew Wollny’s lastest CD, Wunderkammer. Together with harpsichordist Tamar Halperin, and producer Guy Sternberg, Wollny again searches for that which hasn’t been heard before. This CD is a sound trip into the wonderful worlds which are created when all the historic and modern keyboard instruments of an entire museum are combined.

Keyboard instruments which for a long time didn’t appear to go hand in hand: here you have it all on one CD. Harpsichord, celesta, harmonium, rhodes piano, concert grand: a kaleidoscope of palpable possibilities - the hard, “quill” sound of the harpsichord, the heavenly sound of the ringing celesta and the warm, sacral musical air of the harmonium sit beautifully next to the captivating, oscillating, metal reed sound of a Rhodes E piano and the dependable brilliance of a concert grand. The title Wunderkammer (“chamber of curiosities”) is therefore spot on. These Wunderkammer were the secret rooms in castles and monasteries in which rulers and bishops stored all their curious treasures in Late Renaissance and Baroque times. These may have included anything from a narwhal’s tusk to porcelain from Eastern Asia, obscure gaming machines, globes and surgical instruments – many bizarre and wonderful things that would amaze onlookers. It is these chambers of curiosities which fascinate Michael Wollny; “They should also always be a miniature portrayal of the world, a microcosm. Many moments come together to form the whole.”

Just like on this CD; the music of the twelve tracks unfolds itself to be both exotic and beautiful. In the first piece, for example, different key tones approach each other from sparse motifs – it sounds as if there is a ticking clock over which time strides leisurely through different moods. In other pieces, nervous sounds whirr over hard harpsichord tones, soft rhythms pulsate under clanging chords, swirling tremolos diffuse under thunderous bass and cyclical motifs race manically along whilst heavy strokes on the piano and jazzy phrases drive the piece forward, captivating the ear whilst the continually changing melodies get caught up in each other in a enchanting rhythmic maelstrom. In contrast, there are mild piano chords which sound so ostensibly ‘normal’ that they have something almost exotic about them in-between the other pieces.

This music possesses a quality which really sharpens the perception: the sounds are unsettling, hypnotic, minimalistic, disquieting, dazzling, and certainly not of the everyday. And that is how they are meant – this can in part be deduced from the titles. The tracks entitled “Kabinett” are simply “rooms in which different things happen,” says Wollny. “Chur” is a homage to the writer Thomas Bernhard and a place in the novel “Der Untergeher”, which tells the story of the piano virtuoso Glenn Gould. “Mesmer” is dedicated to Franz Anton Mesmer, a doctor and pioneer of hypnosis – similar mesmeric qualities can clearly be heard in the music. “Sagée” is inspired by Emilie Sagée, a teacher and famous doppelgänger figure of the 19th century. Witnesses reported seeing this person in two places at the same time whereby the doppelgänger imitated the movements of the other exactly. In this piece the harpsichord imitates the melody of the piano and is, so to speak, the shadow of the piano.

This CD is a sensual and intellectual adventure, and it is most certainly also a musical one. Michael Wollny’s pieces are here not only set compositions. Some were also composed as totally (or almost totally) free improvisations whilst others have small improvisation sections, adding to the sense of the unexpected and the unveiling of hitherto undiscovered musical gems.

Wollny was fascinated by recording a CD which was only possible as a studio production – not least because he can be personally heard playing simultaneously on different channels. The result is a Wunderkammer which, after a few minutes of becoming accustomed to the sounds, offers a highly captivating portrayal of the acoustic worlds of the present and the past. It is also a voyage to the inner worlds of the music that the listener, guided on in amazement, can explore from one association to the next.