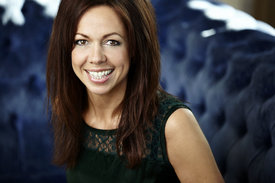 “She has soul in her voice” (Nils Landgren about Rigmor Gustafsson)

Rigmor Gustafsson is the singer/songwriter who stepped out from the vast forests of Värmland and stepped onto the steaming asphalt of New York, only to later up sticks and settle in Stockholm with the mission of taking on Europe.

To date, Rigmor has no less than nine albums in her own name, all of which show an incessant desire to try new paths. This has made her one of Sweden's, in fact Europe's, leading and most popular jazz artists, with a long, varied and award-winning career behind her. To name just a few, she has been awarded the Swedish Royal Academy's Jazz Prize and Sweden's Radio Prize, Guldkatten, and has even been pinned with the Litteris et artibus medal by the hand of his Majesty the King of Sweden. In addition, she has won a Swedish Grammy for the album Alone with you, containing only her own compositions, and three of her albums have gone gold.

However, the guitar, not the song, was Rigmor’s first love. From the outset self-taught, but later schooled in both classical and jazz guitar. It wasn’t until her time at the music high school that she began to sing publicly and joined a number of different bands. Attending the music colleges in Ingesund and Stockholm, interleaved with evening slots as guitarist and singer in various cover bands, made her mature enough to face three years in New York, where she joined the New School's Jazz Programme and formed the first band of her own.

Since 1997, she has been based in Stockholm, but with Europe as her wider workplace. Over the years, she has appeared in various configurations, from duos to symphony orchestras. Rigmor has made a number of appearances on Swedish TV in conjunction with both Crown Princess Victoria's wedding and birthday, at the Nobel Prize banquet, at the opening of Swedish parliament, as well as on Swedish shows På Spåret, Allsång på Skansen, Så Ska Det Låta, and more. Between 2015 and 2017 she was an adjunct professor at Ingesund College of Music, and since 2017 has been elected to the Swedish Royal Academy of Music.

First and foremost, Rigmor has travelled her own path, both on stage and on vinyl. Her first album was released in 1996 by the Swedish record company, Prophone. Since 2003, and the release of her album I Will Wait For You, she has been signed to the German record company, ACT.

On her latest album, Come Home (2019), Rigmor once again presents not only her own very personal style of music, but also music by three other female artists, Kate Bush, Joni Mitchell and Tanita Tikaram. The most important factor for Rigmor, however, is not performing her own music, it’s loving the melody and the harmony and being able to identify with the lyrics. Only then does music for her feel like healing!