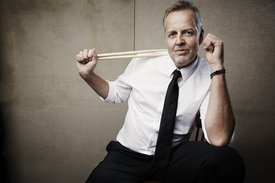 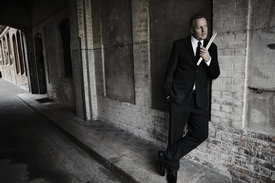 Cover art (detail) by Gert & Uwe Tobias, by permission of the artists

James Dean and Marlon Brando were the glamorous heroes of the silver screen in the 50s. Character actors, sex symbols, blasé eccentrics with a penchant for extravagance. Role models for the rebellious youth: the embodiment of cool. A new attitude towards life was spreading around the USA. "The Birth of the Cool" also happened at the same time in the field of jazz, leading it to become the soundtrack of a generation. Miles Davis, John Lewis and the Modern Jazz Quartet, Dave Brubeck and Chet Baker (the "James Dean of jazz") gave jazz a whole new direction: the search for a special "cool" atmosphere based on tone and space in jazz, on substantial melodies with a laid-back approach designed for the collective. But this music was never cold-cool, it was merely played and conceived with what one might call a cool head.

It is exactly this feeling and understanding of music that speaks from the heart of Wolfgang Haffner and drives his music forwards. So producer Siggi Loch didn't have any problem at all in convincing him to reinterpret an old understanding of the attitude with "Kind of Cool" in a way that was reminiscent of the origins of coolness in jazz: "The first jazz record I ever had was a gift: "Dave Brubeck live in Carnegie Hall". Immediately after that I went out and bought the Jazz Messengers and the Modern Jazz Quartet. That is how I began to occupy myself with jazz," Haffner recalls. So even if this ECHO Jazz-winning drummer, who is one of Germany's most successful jazz-band leaders, has played with the crème de la crème of the international music scene since then, in nearly all styles all the way through to rock and pop, and even if he has been involved in a good 400 albums, the source of it all were the heroes of modern jazz between 1950 and 1960. "I wouldn't call myself a cool, swing or bebop drummer," says Haffner. "I try to find the essence of the music. But the timing, melody and compositional structure of the cool jazz, that is in the nature of my music. The sound is the focus, and I think that is the important thing."

Three main pillars define "Kind of Cool": First of all, "cool“ jazz tunes had to be on it. "So What" for example, the opener of "Kind of Blue", and "Django", the perhaps best-known composition by John Lewis, from the first album of his Modern Jazz Quartet. Secondly, standards were chosen from different styles that lent themselves to a "cool" interpretation. The most logical choice was "Autumn Leaves", made famous by the versions crafted by Cannonball Adderley with Miles Davis in 1958 and by Bill Evans in 1959. The Broadway ballad "My Funny Valentine" from 1937 also became a modern jazz standard thanks to the recordings made by Chet Baker and Miles Davis. And Billy Eckstine's "Piano Man" can be considered one of the "coolest" numbers made with the Kansas City sound of Count Basie; the two recorded it in 1959. Finally, Wolfgang Haffner contributed three of his own compositions that fit into the programme.

"If you try to copy what they played back then, you can only lose," Haffner explains. "Nobody needs a second "Kind of Blue". What makes "Kind of Cool" so special is confronting the disparate fathers of the "cool“ tradition with the other feature, and to take the resulting number down to a common denominator: Davis' "So What", for instance, is dipped in the Modern Jazz Quartet sound by means of the vibraphone, while contrastingly the strict quartet piece "Django" gains the dynamic and ethereal splendour of the brass. Haffner's normally opulent compositions, that work with the dynamics and various sounds and rhythms, appear here in a sober, classic light. "Kind of Cool" is permeated by the typical Haffner feel that flows organically and naturally through the music.

Haffner has a veritable all-star band at his side for "Kind of Cool". No other could have met the requirements better than Dusko Goykovich. The 83 year-old trumpeter with an ECHO Jazz for his life's work actually played together with the fathers of cool and modern jazz like Miles Davis, Art Blakey and Chet Baker. Pianist Jan Lundgren could also be considered as being ideal for the project, thanks in part to his profound mastery of the Great American Songbook and classical music; but also to his clear touch, intelligent phrasing and extraordinary timing. The vibraphone has a very special role on "Kind of Cool", having been one of the characteristic sounds of the Modern Jazz Quartet under the mallets of Milt Jackson. Christopher Dell, the virtuoso, avant-garde all-rounder among vibraphonists meets the challenge with aplomb. Finnish saxophonist Jukka Perko takes on the role of Paul Desmond, while e.s.t. bassist Dan Berglund helps Haffner provide the relaxed groove.

Max Mutzke, a true soul man, takes over the vocal part on "Piano Man": "He'd never even heard of the piece, but in the end we used the very first take – it was perfect right off the bat," Haffner recalls.

Jazz is just as "cool" today as it was then.